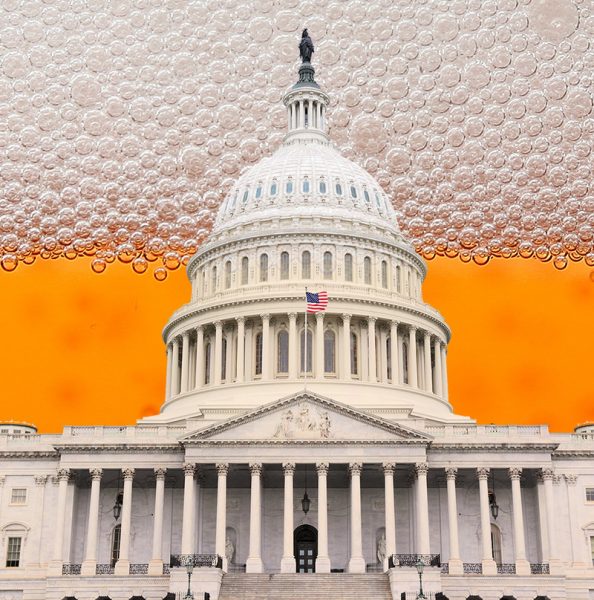 “America’s small craft brewers are incredibly proud and appreciative of the strong bipartisan and bicameral support that we have received from the United States Congress,” said Bob Pease, President and CEO of the Brewers Association. “We are small Main Street manufacturers located in virtually every Congressional District in the country, and employing more than 130,000 Americans. We truly are an American success story built on the passion that our small brewers have for their craft and their communities. Members of Congress see that passion, determination and success, and want to foster it. That is why more than half the United States Congress has co-sponsored the Craft Beverage Modernization and Tax Reform Act. We are hopeful that this consensus legislation can be enacted this year.”

“Beer is bipartisan, and I want to thank the broad coalition of Senators and House members from across the country for supporting this common sense legislation that will provide critical tax relief to America’s brewers and beer importers,” said Jim McGreevy, President and CEO of the Beer Institute, which represents brewers, beer importers and supply industries. “The beer industry helps to support more than 2.2 million American jobs in every congressional district across the country. I look forward to Congress taking up the bill and moving it to President Trump for his signature so that brewers and beer importers can continue to invest in their businesses to meet consumers’ demand for beer.”

“California wine is a signature industry for our state and nation. This legislation will simplify and reduce the tax burden on our 4,700 wineries, which produce 85% of U.S. wine,” said Robert P. (Bobby) Koch, President and CEO of Wine Institute.  “As the very epitome of value-added agriculture, wine and vineyards represent a long-term commitment uniquely tied to the land, generating jobs, tax revenue, trade, tourism and international appeal.”

“Wine is truly an all-American beverage produced in all 50 states. There are now more than 10,000 wineries with grapes from over 670,000 acres preserving precious agricultural land, The American wine industry’s total economic impact of nearly $220 billion includes 1.7 million jobs and $75 billion in wages,” said Jim Trezise, President of WineAmerica, the national association of American wineries. “We are grateful that so many Senators see wine as an economic engine as well as a delightful beverage that enhances the quality of life.”

Introduced by Senators Ron Wyden (D-OR) and Roy Blunt (R-MO) in January, the bipartisan legislation creates a fair and equitable tax structure for brewers, winemakers, distillers and importers of all beverage alcohol, which will allow them to continue to invest in their businesses and grow jobs across the country.

H.R. 747, identical legislation introduced in the U.S. House of Representatives by Representatives Erik Paulsen (R-MN) and Ron Kind (D-WI), has also garnered 281 co-sponsors from both sides of the aisle.

Craft brewers across the country are enthusiastic about the legislation:

“At around 1,000 barrels projected for 2018, on the surface, tax reform for a company our size doesn’t seem like such a big deal. However, that assumption could not be farther from the truth. Tax reform initiatives like CBMTRA directly impact the workable cash flow that allows for small producers like us to build infrastructure. Expanding infrastructure is essential to growth and job creation. Small breweries like ours are providing jobs, supporting families, and building an American industry to replace those that have dried up. It’s cyclical. The tax savings help us purchase more equipment while creating more manufacturing jobs. Additional labor and equipment allow us to create more beer.  Creating more beer requires more positions to aid in sales of the product. Ultimately, more sales equate to additional tax revenues. When it comes down to it, the abilities that breweries have been afforded with recent legislative changes concerning the brewing industry and tax relief have opened up vehicles for growth. It has allowed us to have a higher cash flow that is immediately reinvested into the business. By continuing tax relief efforts, breweries like Zeroday can continue to grow and help support the people and places they employ and populate.”   – Brandalynn Armstrong, Zeroday Brewing Co. Harrisburg PA

“Double digit annual growth, keeps us in a constant state of hiring and production/ construction. Relief from bi- weekly debt of over $100,000 would result in additional hiring, bricks and mortar construction, environmental improvements and economic stability for this growing business. 60 million dollars of impact in this rural struggling region is important.”  – Deb Carey, New Glarus Brewing, New Glarus WI

“With the CBMTRA’s reduction in federal excise tax, we would offer a combination of pay increases, job creation and increased innovation in our beer program, which would sell more beer and grow our company.”  – Leah Wong Ashburn, Highland Brewing Company, Asheville NC

“The Craft Beverage Modernization and Tax Reform Act would allow our brewery to reinvest in equipment to grow our business.  Specifically, with one year’s savings we could add a new tank to increase our annual capacity by 20%.  The ripple effect is the addition of more jobs and purchases of raw materials.”   – Megan McKay, Peacetree Brewing, Knoxville IA

“We make about 14,000 barrels per year.  That tax reduction would yield our company in the neighborhood of $50K.  I would immediately invest in another sales rep and another (American made) tank if this (CBMTRA) becomes law.  I know that I am not alone among my fellow brewers.  I imagine the vast majority would re-invest.”  – Dave Fougeron, Southern Star Brewing Company, Conroe TX

“CBMTRA would have a significant impact here at Due South.  While we are a fairly small brewery (about 5,000 barrels per year), we do compete in the large market as our beer is available in draft and in package (cans).  We don’t have the marketing budget the big beer companies have so it’s a constant struggle to get our beer on the shelf and an even bigger one to keep it there.  Additional tax savings would allow us to put more folks to work so we can continue to grow our business and help ensure the security of the 24 employees already at the brewery.”  – Mike Halker, Due South Brewing Company, Boyntan Beach FL